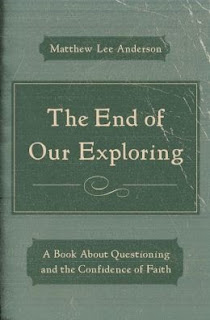 I couldn't help but think of Donald Miller when I read this book. It's been years since I read Blue Like Jazz, yet I have a feeling that Anderson's book was, in some small way at least, a reaction to Miller's rather vacuous approach to the inevitable crisis of faith for young, self-aware evangelicals.

That's not to say that the two authors are on the same plane. Anderson's work is imbued with more theological and intellectual depth, while Miller is probably more accessible as a writer. You could say Miller is kind of like the rapper Macklemore. Both exist in a field (evangelical authoring and rapping) in which dabbling just enough in thoughtful perspective and social reflection gives one an aura of sagacity well beyond reality. Anderson, meanwhile, seems to be more like Mos Def, a rapper who is highly respected for his depth of knowledge, yet who ultimately caters to a smaller audience because his songs focus more on lyrical depth than easily-hummable hooks.

Having said all that, Anderson's book here is clearly an attempt to be somewhat accessible. It's a short read (I finished this in a few hours), and tends to be somewhat repetitive in its themes. About those themes...

Overview/Summary: Part meditation, part Scriptural exposition, part personal reflection, Anderson draws heavily on contemporary evangelicalism's dead British intelligentsia (Lewis, Chesterton, MacDonald, et al), the words of Scripture, and ancient Greek philosophers, among others. He addresses a targeted audience: American Christians, and most specifically it seems, evangelicals. This is a pastoral book for such Christians, by such a Christian, as Anderson makes clear throughout with references to "we" and "us" in relation to "the church" (most of the audience for this book probably harbor the same basic assumptions about what Anderson means when he says "the church" or "the creed," terms he uses without qualification. If he had a broader, more academic audience in mind, then one could certainly question his assumptions and/or definitions for those terms).

The goal for Anderson is to "explore whether we can question well and what such questioning might look like." Questioning, Anderson notes, is a lost art in the church and in American culture. But in order to correct that, people must actually desire to question well. And the first step in questioning well is to question our very questions.

"No question is neutral," Anderson writes. Questions spring from our desires, they are slanted towards self-justification, towards the answers we already seek, if only subconsciously. Thus, we must not assume innocent sincerity in the form our questions take, as if we are blank slates and above the fray.  Instead, Anderson goes Augustinian: "As a human endeavor, our questioning is fallen and broken."

Questioning the questioner (ourselves) should ultimately lead us towards God himself, who is the final end of our exploring, the home from which we can safely launch our inquiries into the world and to which we also ultimately return.

Doubt and questioning are not same thing. Anderson decries doubt as "a vacillating double-mindedness that prevents us from living a fully integrated life within the world" and argues that "conflating doubt and questioning is one of the chief confusions of our age."  What of the instances in Scripture where doubt seems to be expressed? To Anderson, those instances are not proof that doubt is an inevitable or desirable form of the Christian life. Rather, the Biblical examples differ from our incapacitating and uncertain form of doubt because Biblical doubt is "taken up into the life of faith, not kept outside of it" and eventually "resolves into hope."

Questioning well leads us towards a greater understanding of God himself, and a greater confidence in our faith (or, rather, in the Person in whom we place our faith). In Anderson's framework, Christians' questioning ultimately has limits that are shaped by the presuppositions of Christianity. For example, belief in Jesus' death and resurrection is simply not an item that can be tossed aside for Christians.

Anderson does not consider this fact a deterrent to considering all possibilities, however. He articulates a concept of "intellectual empathy" in which Christians can "imaginatively enter into how another person is looking at the world." Such thought experiments, which should only be done by mature Christians, allow a confident Christian to further strengthen his own arguments, while providing a way to understand the underlying framework that goes into the conclusions that non-Christians might reach.

Community is essential to effective questioning. After all, questioning is "a communal practice and cannot be done without the help and sharpening of friends." And we must not be so quick to discover the answer. Questioning well demands patience. Easy answers and clichés are out. The answer itself is not the point: the struggle and process to get to the answer is. To Anderson, the "answer-dispensing industrial complex is short-circuiting the work of empowering people and communities to patiently linger over the questions so that their growth into understanding is set within their sorrows and joys together as the church."

In the end, our questioning should lead us to "arrive where we started...return to our home, only to find it new, deeper, and more perfect." Meanwhile, "in the space between the advents, before the end of our exploring comes upon us, we freely explore the 'all things' we are given in Christ and learn, ploddingly and patiently, to see them as He does."

Analysis: In many ways, this book reads like much of the "gospel-centered" content of the "young, restless, and reformed" crowd, but with more intellectual depth. This makes sense, since Anderson is a member of an Acts 29 church in St. Louis. As such, the book is primarily a pastoral work meant to enrich the lives of everyday Christians by spurring them on towards a life of skilled questioning and exploration within the bounds of orthodox Christian beliefs.

Because of this, Anderson's engagement with historical and/or philosophical movements and ideas is (by necessity) left wanting. As one example, Anderson utilizes the all-too-familiar trope of raising the specter of the hipster in order to dismiss postmodernism. According to Anderson, popular postmodernism is nothing more than "modern skepticism with hipster glasses." The reader is left with a humorous image and a chuckle, but few details about what exactly Anderson really means.

As another example, Anderson makes the sweeping statement that "Descartes systematized his skepticism. By doing so he sowed the wind, and we are still reaping the whirlwind." Then, despite his own grandiose claim, he later laments the fact that "we give French philosophers too much credit." And although he includes footnotes (I, for one, am a sucker for footnotes, for both pretentious and legitimate reasons), they are usually just humorous asides, direct citations for the quote he just used, or a reference to a single book that agrees with the point he made.

Minor quibbles. Rocks thrown from below, really, and from a hastily-written blog post at that, as Anderson is clearly a superior writer and thinker than me. Although I didn't agree with all of Anderson's answers, I enjoyed this book for a number of reasons. Here are just three:

1) Anderson is willing to question himself, to bare his own internal weaknesses. As one example of many, he writes that "Growing up, my questions were frequently motivated not by an interest in the answer per se but by my eagerness to impress. And, to be candid, I worry that many of them still are." His admissions lack any sense of false humility or pretension, and instead come across as matter-of-fact declarations from a man who has clearly examined his own soul, found it wanting, and yet felt free to admit his own shortcomings because he places his confidence and faith in Another.

2) Although I am now embarking on a career path in academia that will take me back to graduate school, I have been a high school teacher for the past four years. As a result, I greatly appreciated Anderson's illustrations from his days teaching high school classes. Of course, after reading his description of his questioning techniques, I felt my own teaching style to be wholly inadequate. Yet, if I do return to the classroom in some form, he has given me something to consider and incorporate.

3) "Friendships across party lines help us destroy caricatures." Yes. Anderson's section on how Christians should interact with opposing viewpoints, which came near the end of the book, put into words some of my own developing thoughts on the subject. From Anderson again: "When we live in intellectual enclaves, persuasion ceases to be the point of our public discourse. In politics and the church, we have very little reasoning together and a good deal of repeating talking points and retreating to defend our positions."

I am happy to see that a voice like Anderson's exists in the evangelical Christian world. It needs people who can hold firmly to the so-called "traditional" convictions while also being capable and willing to engage those who hold to different views. It needs people who can play the role of contrarian without hubris, or at least, with limited amounts. Finally, it needs people who can challenge young evangelicals, who can speak to them without telling them exactly what they want to hear. Anderson, it seems, fits the bill...it's been ten years since I left my home, gained independence, entered into college life, and began the first major "questioning" phase of my life. I wish a book like this had existed then.
Posted by Paul Putz at 10:48 PM