Charles Savidge was as a church planter, pastor, matchmaker, entrepreneur, revivalist, author, and social worker in Omaha from 1882 until his death in 1935. To date, he has been largely forgotten by historians, but his life certainly did not lack for excitement. To list just a few of his more interesting activities: he left the Methodist Church to start his own independent People's Church in the slums of Omaha; performed over 6,000 weddings and launched a matchmaking bureau; started a home for the elderly that is still in existence today; attempted (and failed) to merge his People's Church with a People's Church in Spokane; published four books; initiated an ill-fated campaign to cast the demons out of notorious pickpocket nicknamed "Fainting Bertha"; and received newspaper coverage from the New York Times, Boston Globe, Chicago Tribune, San Francisco Call, and countless other newspapers across the country. 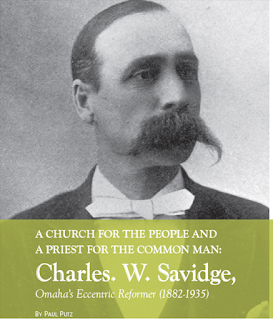 After spending two summers researching Savidge, my article on his life and his unique brand of religious reform is set to be published in Nebraska History later this year. Over the next couple months, I plan on using this blog to highlight Savidge's most interesting escapades with series of short posts.  In the process, I'll also explain Savidge's connections to and interactions with a variety of religious and cultural movements brewing in the late-19th and early-20th century, including the radical holiness movement, social Christianity, nativism, revivalism, Prohibition, and more.

Sadly, even though work still needs to be done on the intersection between enormous handlebar mustaches and religious reform, my research does not directly address that topic.