It all started a few weeks ago when my favorite NBA writer Zach Lowe posted a piece on Grantland titled "The Life and Death of Fandom." In the article Lowe wrote about his transition from being a die-hard Boston Celtics fan to a dispassionate reporter of NBA basketball. The Celtics now are dead to Lowe, as far as he's concerned. Wins or losses elicit no emotions. But he used to have a favorite player with the Celtics, back in the 2000s when Paul Pierce "was struggling to find himself" and Lowe felt the same. The old flicker of fandom came back briefly for Lowe last month when he watched a Paul Pierce tribute video before the Celtics-Nets game, leading him to write the piece.

The article offered a uniquely personal look at Lowe, a writer who Bill Simmons jokes is like Spock due to his cold, calculating basketball analysis. And hidden within the piece were some innocuous biographical details. Lowe wrote: "I was a wannabe journalist who didn’t have the guts to pursue the career path, so I hopped around in random directions -- from teaching high school, to chasing a PhD in history, to covering high school football in Virginia just to see how it felt."

Lowe's revelation that he was once a PhD student in history fascinated me. Maybe it was because I already admired Lowe's writing, and here was a connection. In a weird way I was connecting to Lowe in the same way that he had connected to Pierce - as a fan. I was looking at someone I admire, and trying to see in myself similarities.

The story could end there, but twitter and my shamelessness (combined with that of fellow PhD students) intervened. I decided to make it my mission to figure out where Lowe had studied history and what he had studied. After a few failed attempts in the past few weeks to get a response, Lowe was finally gracious enough to play along and briefly answer my pestering inquiries. I've posted the relevant screen shots below, because why the hell not?

It all began with this:

Immediately, a fellow PhD student in history seconded my request:

Pretty quickly we captured the interest of a third PhD history student who also happens to love the NBA:

And then in came the one graduate student smart enough to actually google "Zach Lowe history student" (or something like that). Stuart's sleuthing ended up being decisive in getting Lowe to respond: 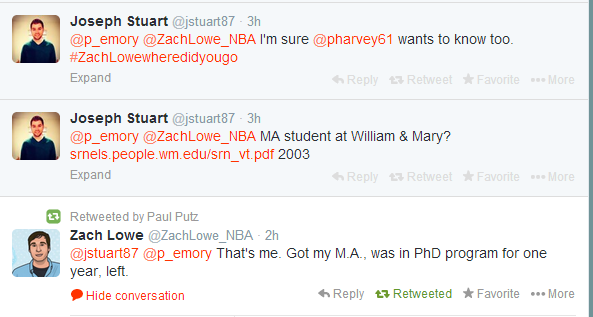 At that point, one of my favorite historians (and a fellow basketball fan) hopped into the conversation to point out the wisdom of Lowe's career choice:

But I still needed more information. What did Lowe actually study? (OK, I didn't really need any of this. But whatever). So I went to the William and Mary library website, searched for dissertations/theses written by "Zachary Lowe" and came up with this. Lowe once again played along and confirmed, maybe so that we would stop showing up in his mentions:

It wasn't over quite yet, though. Since Lowe apparently has an avid fan base among history PhD students, another hopped in:

And with that, our mission was complete.

So what was accomplished in all this? I don't know. But I do know that PhD students like to be fans sometimes, too.