Last year I received a Platzman Fellowship from the University of Chicago Library, which allowed me to spend some time over the summer in the Amos Alonzo Stagg Papers. Stagg was a leading figure in the "muscular Christianity" movement of the late nineteenth and early twentieth centuries. He first earned fame as a baseball pitcher and football end while playing for Yale in the 1880s. Thanks to his celebrity, Stagg attracted eager audiences in the Northeast as he lectured on the importance of faith and the blending of Christianity and athletics.

After his college days Stagg embarked on a coaching career, most notably with the University of Chicago. He coached the Chicago Maroons for forty years from 1892 until 1932, all while continuing to espouse the Christian values that he claimed could be imparted through the game of football. Because Stagg will be a crucial figure in my dissertation (which explores how particular forms of Christianity were embedded within the world of big-time sports in the United States), it was incredibly helpful to spend time with his papers in Chicago. 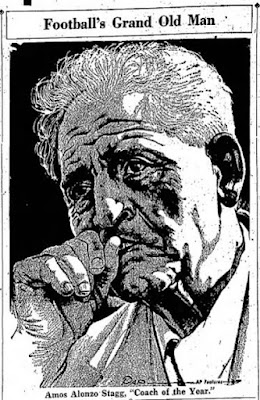 During my research, I came across a few really fascinating sources. Most of them will make their way into my dissertation one way or another. But I could not resist the desire to make at least one set of sources public before the dissertation is complete. That set of sources -- including letters, telegrams, and newspapers clippings -- details Stagg's role in defending the rights of Japanese Americans in early 1945, near the end of World War II.

As far as I know, no other scholar has written about Stagg's campaign on behalf of interned Japanese Americans. But the good folks at the Sport in American History blog allowed me to share what I had learned about Stagg. After that story was published, one of my favorite radio shows, Only A Game, asked me to talk about my story with them as well. They produced a great 12 minute segment about Stagg that was featured on their February 17 show.

If you haven't had a chance to read or listen yet, feel free to check them out: