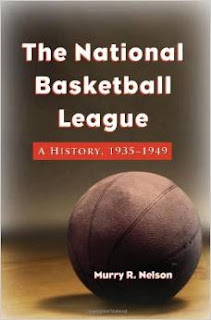 
The NBL did not entirely keep black players off its courts, however. In 1942 the Chicago Studebakers of the NBL became the first fully integrated major sports team, with seven black and five white players. Black players Dolly King, James "Pop" Gates, and Bill Farrow were also signed to NBL franchises in 1946-1947. Then in 1948-1949 the all-black New York Rens joined the league. Business interests rather than a desire for racial equality usually inspired these limited pushes for integration. Even so, the NBL was more advanced on this front than any other contemporary sports league.

For Nelson, one of the most important aspects of the NBL was its mid-sized, community-based, Midwestern roots (in fact, the NBL had emerged out of a league called the Midwest Conference). This stood in contrast to the BAA, a league formed mostly by NHL owners in big eastern cities in order to fill large arenas when hockey was out of town. Oshkosh, Sheboygan, Fort Wayne, Akron, these were the longtime standout NBL franchises. Playing in high school gymnasiums or relatively small city auditoriums, the teams primarily existed as a source of community pride with profit a secondary concern. Their presence in mid-size cities actually helped them gain publicity from local press and radio. Teams playing in larger cities -- including BAA teams -- were often ignored by sports media. There were too many other games in town.

It's possible that Nelson overstates the contrast between NBL owners and BAA owners, but there's certainly something to his claims. In fact, it was that very contrast, particularly the allure of the BAA's big cities, that led to the NBL's downfall. George Mikan, the first nationally known professional basketball superstar, played a part as well. 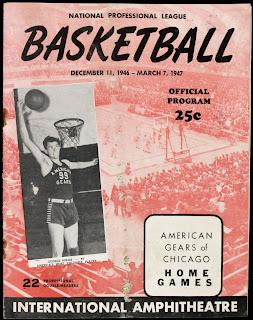 Mikan joined the NBL out of DePaul University in 1946. He led his first team, the Chicago Gears, to an NBL title in 1946-1947. Before the 1947-1948 season, however, the Gears' owner embarked on an ill-fated attempt to form his own professional basketball league. The venture folded within three weeks, and NBL franchises eagerly scooped up the Gears' players. Mikan ended up with the brand new Minneapolis Lakers franchise. With a superstar in tow and the big city arenas of the BAA in their sights, the Minneapolis owners urged the NBL to merge with the BAA. After winning the NBL title in 1947-1948, they led three stalwart NBL teams -- the Fort Wayne Zollner Pistons, Rochester Royals, and Indianapolis Kautskys -- to jump ship to the BAA, setting the stage for the NBL's merger with the BAA before the next season.

Reading Nelson's account of the Mikan/Minneapolis saga, I couldn't help but play the what-if game. What if the Chicago Gears remained in the NBL? A merger would probably have still happened between the BAA and NBL, but maybe it would have occurred on terms more favorable to the NBL. More importantly, as a Celtics fan, Minneapolis would not have lucked into the most dominant big man in the game, and the Lakers' long history of success would have at least been delayed.

There are plenty of other fascinating tidbits in Nelson's account, including details on the brief involvement of John Wooden (the league's second-leading scorer in its first year) and Press Maravich (father of Pete). I also loved learning about 6'5 center Leroy "Cowboy" Edwards and 5'11 guard Bobby McDermott, the league's two best players for most of its existence.

McDermott, often credited with the best long-distance two-handed set shot in basketball history, joined the NBL's Fort Wayne Zollner Pistons in 1941. He earned six All NBL first team honors, four MVPs, and won three NBL championships. In 1988, he was inducted into the Naismith Hall of Fame. 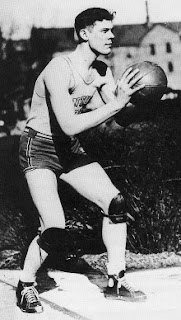 As for Edwards, he was the original Kentucky one-and-doner, a player Calipari would love. After dominating college ball for one season, so much so that the offensive 3-second rule was instituted in his wake, he turned pro. Eventually catching on with the Oshkosh All Stars, he played in every NBL season. Possessing a deadly hook shot from either hand combined with brute strength, Edwards earned six All NBL first teams and two All NBL second team honors. He also won three MVPs and led Oshkosh to two NBL titles and four runner-up finishes. Inexplicably -- or perhaps "shamefully," as Nelson puts it -- Edwards has not yet been inducted into the Naismith Hall of Fame.

It was not simply Edwards, McDermott, and the impressive array of talent that makes the NBL important. The league also led the way in other innovations, including the elimination of the center jump after made baskets, the push for a clean-cut "respectable" league, the expansion of media coverage, a centralized league office, and more. Perhaps the NBA's most important innovation in its early years, the 24 second shot clock, came from the mind of Danny Biasone, who got his start in professional basketball as the owner of the NBL's Syracuse Nationals.

Nelson makes a convincing case that the NBL deserves more respect. That said, as much as I enjoyed Nelson's book, The National Basketball League is not always an easy, page-turning read. At times, Nelson's narrative plods along (not unlike the style of the game at the time), getting bogged down in endless listings of game results. He goes season through season, documenting important games, recounting leading scorers, and so on. The personality of the individuals involved are sometimes missing in the text. Despite those drawbacks, hoops history aficionados will find plenty to love and learn in this book.