Summer Book List: Henry George (and George Norris) and the Crisis of Inequality

Note: this is the second book in my "Summer Book List" series. In the first installment I discussed Murry Nelson's The National Basketball League: A History. 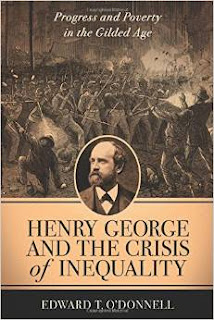 May 2, 1930 was an active day in the U.S. Senate. With unemployment already well past three million people, the economic downturn that would become known as the Great Depression occupied the minds of many senators.

On that particular day, though, the main issue at hand was the confirmation of President Hoover's nomination for the Supreme Court, John J. Parker. A longtime resident of North Carolina, Parker's nomination was part of Hoover's plan to attract southern Democrats into the Republican fold. But the nomination of Parker, a lily-white Republican with a history of racist statements and actions, sparked opposition from the NAACP. Labor leaders were not happy with Parker, either, criticizing his use of injunctions against strikes and his support for yellow dog contracts.

What authority could be invoked in these debates and discussions over a growing economic crisis and a controversial Supreme Court justice? For Senators Gerald Nye and George Norris, that authority came in the voice of a nineteenth-century reformer named Henry George. Early in the day's proceedings, Nye inserted into the Congressional Record George's late-nineteenth-century words on inequality, condensed into more palpable form by George's son-in-law Will Atkinson:

Later in the day, during a two-hour speech explaining why he opposed Parker's nomination, Senator Norris turned to George as well, quoting "one of the most beautiful things I have ever read on the preciousness of human liberty." The lengthy quotation from George's Progress and Poverty spanned three paragraphs, ending with George's plea: "In our time, as in times before, creep on the insidious forces that, producing inequality, destroy liberty....Unless its foundations be laid in justice, the social structure cannot stand." For Norris, Judge Parker's history of judicial activism against labor meant that he would only exacerbate the problem of economic equality made conspicuous in the wake of the 1929 Crash. Ultimately, Norris's view (alongside the NAACP and others), won the day. Parker's nomination failed by one vote.

Edward O'Donnell's book is not a traditional biography. Rather, O'Donnell uses Henry George as a lens through which to understand the political and social contexts of Gilded Age America. As O'Donnell writes, he "seeks to explain the origins and meanings of [George's] influential writings on social reform, especially Progress and Poverty, while also examining how and why they gained such traction among Gilded Age workers struggling to comprehend the revolutionary changes brought on by industrial capitalism." With those aims in mind, the majority of the book covers the ten years between 1877 (when George began writing Progress and Poverty) and 1887 (the year after George's unsuccessful campaign for New York mayor).

Although George's opponents often painted him as a radical, his critique of Gilded Age economics was grounded in a desire to preserve capitalism and protect the "free labor" republican promise of a decent living and economic independence for all industrious men. Witnessing spectacular economic progress for the few combined with rampant poverty, George came to doubt the wisdom of some laissez-faire republican ideals. The emphasis on individualism, freedom of contract, and a negative state seemed to limit opportunities for working-class economic advancement.

Believing that the economic order as it stood was unjust, George articulated two challenges to the prevailing notions of political economy. First, he criticized the idea that land could be "owned" by those who did not actually use or develop the land -- those who accumulated wealth by charging rent (or selling land for profit). To combat this, George suggested that the state eliminate all taxes except one: a tax on any excess income derived from land (this remedy eventually became known as the "single tax"). No longer would speculators earn money from land on which they did not live or work. Along with George's challenge to (though not obliteration of) the notion of private land ownership, he argued that the state needed to take an active role to ensure a level playing field for all citizens willing to work.

The eventual success of Progress and Poverty -- no other book on economics was read by as many Americans -- catapulted George into prominence. O'Donnell documents this development, analyzing the author's 1880 move to New York City and his subsequent elevation within the world of reform politics. Prominently connected with Irish nationalists and with labor organizations like the Knights of Labor and New York City's Central Labor Union (CLU), George earned a reputation as a champion of the working man. This eventually led to his famous 1886 grassroots campaign for New York City mayor. Running on a labor-backed platform, George came in second. Still, getting 31 percent of the vote was enough to make middle- and upper-class residents of New York break into cold sweats, and New York legislators subsequently passed a few minor labor-friendly measures. O'Donnell, for his part, brilliantly narrates the ins-and-outs of George's mayoral campaign and its aftermath.

Although George's single tax solution was never implemented, his identification of economic inequality as a moral problem and his critique of "parasitic" speculators and the negative state would all become essential elements to the emerging progressive movement. George was not the sole originator or such ideas, of course. But George does deserve credit for playing a major role in popularizing them. As O'Donnell writes, George "emerged as the first significant figure to confirm [inequality's] glairing presence, to explain the lethal threat it posed to democracy and republican institutions, and to offer a solution." Opposed to the hypocrisy and inconsistencies of laissez-faire industrial capitalism, in which the wealthy denounced state intervention but turned to it to support their interests, George and the working-class activists who supported him cast a vision for a more cooperative society.

One of O'Donnell's great strengths is his ability to write in an accessible style. When I taught American History in high school, my fellow teachers and I would often vent about the difficulties convincing students that the Gilded Age was indeed interesting. For some reason the tagline "Come for the presidents with outlandish beards; stay for the intense debates over civil service reform" didn't quite sell. But in O'Donnell's hands the complexities of Gilded Age society and politics are discussed and explained with clarity and insight. This is a book that readers both inside and outside the academy can read and enjoy.

Another compelling feature of Henry George and the Crisis of Inequality may be unique to my experience, but is worth mentioning nonetheless. I began this post with Henry George's posthumous appearance in the 1930 Congressional Record. Before reading O'Donnell's book, I was not familiar with that story. But after reading O'Donnell's book, I was struck by the similarities between Henry George and George Norris (my hometown hero). Norris's moralism, his opposition to "monied interests," his support for keeping divinely created public lands out of the hands of private ownership (expressed most prominently by his championing of the Tennessee Valley Authority): all of these seemed to fit snugly with the ideas popularized by Henry George. Duly curious, I set out to find a direct mention of Henry George's influence on George Norris, and eventually I stumbled upon Norris's 1930 Senate speech.

Obviously, Norris was one of many progressives influenced by Henry George, and George was not the sole influence on Norris's thought. But it was still interesting for me to see the impact of Henry George's ideas hit so close to my McCook, Nebraska, home.
Posted by Paul Putz at 1:37 PM