Frank Crane, From the Pulpit to the Press

A couple years ago on a Tuesday afternoon I drove to First United Methodist Church in Omaha, Nebraska. There I met Diane and Donna, the church's two archivists. They work on a volunteer basis, coming in once a week to organize and preserve pieces of the church's past.

When I arrived Diane and Donna led me down concrete stairs to the church basement, into a small storage room that served as the church's archive. They knew that I was interested in 1890s Omaha, and they mentioned that they had the perfect source for me: a weekly church newsletter that was distributed for most of the 1890s. After scanning the archive shelves, Donna pulled down two dusty old volumes titled "The Guidon."

I did not expect to find much excitement in a weekly church newsletter. Event announcements, membership lists, sermon summaries: in and of themselves these items did not pique my interest. But I knew that studying the routine activities of Omaha's leading 1890s Protestant church would be valuable. I was also interested in finding themes related to the social gospel. As I flipped through the two bound volumes and took pictures of the pages, I looked for signal words like "Washington Gladden" and "fatherhood of God." 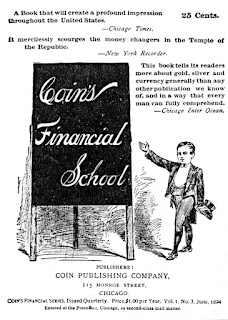 To my surprise The Guidon's contents frequently exhibited a flair for the creative (or at least the unexpected). Instead of mindlessly snapping pictures for future use, I found myself pausing and reading, constantly drawn into the personality exhibited in the text. To take but one example: in order to convince church members to accept a new system of church finances, the editor wrote a parody of the wildly popular 1894 free-silver tract Coin's Financial School. In the original, a man named Professor Coin taught bankers and businessmen the benefits of bimetallism. In the parody, a man named Gould Coin taught First Methodist board members the benefits of a monthly subscription-based church giving system.

Intrigued, I resolved to find out more about Frank Crane, the editor of The Guidon and the pastor of First Methodist from 1892 until 1896. I began my search, as most do these days, with google. And very quickly, thanks to the plethora of digitized newspaper and magazines from the pre-1922 years, I discovered that the Frank Crane who edited The Guidon in such an interesting way was the same "Dr. Frank Crane" who became perhaps the most widely read syndicated newspaper columnist in the early twentieth century and an icon of middlebrow American consumer culture.


Despite Crane's ubiquitous presence in early-twentieth-century American life, he has been little noted among historians. This is partly due to the apparent shallowness of his work. His sunny self-help aphorisms and conspicuous embrace of mass consumer culture make him a less-than-sympathetic figure for many academics. Indeed, figures from Crane's own time -- "smart set" personalities like H.L. Mencken and Sinclair Lewis, -- seemed to say all that needed to be said about Crane. They disdained the shallowness of Crane’s writing, viewing it (in Mencken's words) as “canned sagacity” and “boiled-mutton ‘philosophy'” that possessed “not a weakness for ideas that are stale and obvious, but a distrust of all ideas whatsoever.” Sinclair Lewis, too, created the "T. Cholmondeley 'Chum' Frink" character in Babbitt partly based on Crane (and other popular newspaper columnists).

But thanks to scholars like Joan Shelley Rubin and Janice Radway who have taken "middlebrow" culture as a serious object of study, and more recent works by scholars like Matthew Hedstrom and Erin Smith that have focused on the religious dimensions of middlebrow reading, it seems like the time is ripe for Crane to get more scholarly attention. 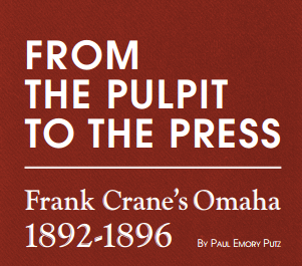 Toward that end, I have an article set to be published next month in Nebraska History on Frank Crane's time in Omaha. I focus on Crane's public activities and the way that his pastoral duties (or perception of his pastoral duties) set the precedent for his career switch later in life. I also use Crane as a lens through which to view a fascinating and tumultuous time in Omaha's history.

When I met up with Diane and Donna a couple years ago, I had no idea where the documents in the church basement would lead. And although this specific article will soon be out in print, as I embark on dissertation research the questions, ideas, and paper trails that have been generated by reading The Guidon are sure to continue to take me in new and unexpected directions.
Posted by Paul Putz at 12:29 PM