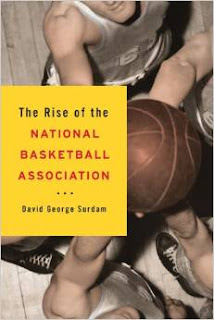 
While Surdam's economic analysis is new, his narrative is not. It tends to draw largely from stories that have been told in other basketball history books, such as Terry Pluto's Tall Tales: The Glory Years of the NBA, Robert Peterson's Cages to Jump Shots, Murry Nelson's The National Basketball League, and Ron Thomas's They Cleared the Lane: The NBA's Black Pioneers (among others). This is not necessarily a drawback, as The Rise of the National Basketball Association provides a coherent synthesis of the basic history of the league to go along with its unique economic angle. Thus, both those who are already familiar with the story of the NBA's early years and those who are not will find something to enjoy.

I'll close with a few of the most interesting tidbits that Surdam mentions in his book: